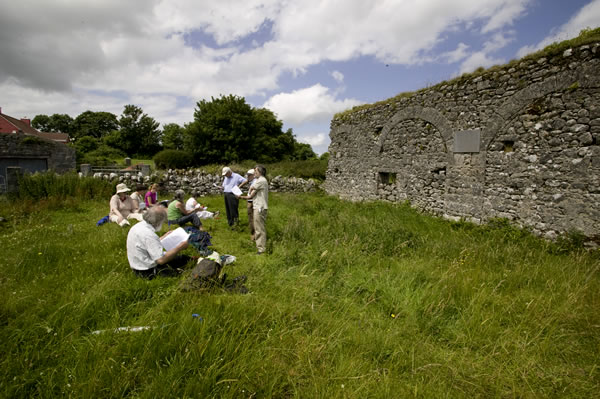 Walking around a piece of property as advertised as a “Prayer Walk” might not mean much to you, or you might think just walking will not result in anything except a good exercise workout if you are not inclined to daily cardiac activities. Yeah, I am there too – the skeptic to this unusual manner of behavior. But, walking around a “wall” actually has Biblical reference. Ever hear about the walls at Jericho?

After many years, Moses died. And God said to Joshua, “Lead My people across the Jordan River. Each place you set your foot will be yours. Just be strong and do not fear. For I am with you wherever you go.”

So Joshua sent two men ahead to spy on a town called Jericho. When they got there, they stayed with a woman named Rahab. But when the king of Jericho heard they were spies, Rahab hid them on her roof. And when it grew dark, she helped them to escape.

“I have heard great things about your God,” explained Rahab.

“Please promise me that you will not hurt my family when your people take Jericho.”

God told Joshua exactly what to do in order to take the city of Jericho. First, Joshua gathered men into an army to march around the city. Then came seven priests, each one carrying a trumpet made from a ram’s horn. Behind the priests came the ark of the covenant, and following the ark came more armed guards.

They paraded around the city of Jericho one time each day for six days. During this time, the priests blew on the trumpets, but everyone else marched quietly.

On the seventh day, the Israelites paraded around Jericho six times. All the while, the priests blew their trumpets, but everyone else remained quiet.

At the sound of that noise, the walls of Jericho began to crumble and then they fell, tumbling to the ground. And all who were inside the city ran in fear. All except for the woman Rahab – the one who had helped the two spies. She knew she would be safe. And she was.Then on the seventh time around the city, Joshua called out a signal. Everyone yelled and screamed and shouted – with all their might!

The Walls Came Tumbling Down!

I have witnessed one wall in the life of my family (wife & kids) having already been knocked down. The sale of our home this past November. We were literally walking around our home and on making our 7th trip around the house we got a call from our real estate agent notifying us our counter-offer was accepted and the house was S-O-L-D! We did not make the profit that we had hoped for, nor did we even break even. We actually lost some money with the sale, but praise be to God we have moved on and can look optimistic on the future God has in store for our family.

(You could probably say that the earlier mention of our house being sold was the second instance of a wall falling down. Before our house was sold, and that was not revealed to me until later, my wife was lead one morning to place her hands on the front door of our home as she was leaving for work and asked God that we get an offer on our house. Guess what? Within a relatively short period of time, 1 day or 2, we got a phone call with an offer to purchase.)

This brings us to our family activities for this evening. We are going to walk around our property and earnestly seek God’s favor on the appraisal of our land. We really need the value to be more than what we paid for it back in 2009. We need the additional equity value to offset our closing costs since we are building the house ourselves. We have been moving forward seeking God’s ultimate direction for our family and the next steps in our ministry that he is calling us to.

He is indeed stretching us and teaching us to walk more intimately with Him. It is not easy and we still do not fully understand all that He is calling us to. We are simply being obedient. Often we think that God’s instructions don’t make sense, but let’s follow the Israelites’ example and take one day at a time as we follow God. Often, we will not see the logic of God’s plan until we have completely obeyed His Word. The Israelites may have felt foolish marching around the city of Jericho for a week instead of going into battle, but the LORD instructions were clear and the Israelites chose to obey.

Could I ask that you join with us in prayer?

I would personally love to hear from you and return the favor if I can be in prayer in God meeting for you a need.